You want to dress better, but most style advice revolves around suiting up or just around whatever is trendy this season.

But that’s not what you’re looking for.

So what you’re really looking for is some casual style tips for guys who want to look sharp outside of a suit and tie.

1. Ignore the fashion world; it will lead you astray.

When trying to figure out how to dress well, men often look towards the fashion world for help. They look to see what’s trendy.

But the fashion world is only good for men obsessed with fashion. If you’re just a regular guy looking to become a better dresser, knowing what’s trendy won’t help you.

In fact, you should do the opposite…

Focus on getting classic clothes that will look good all year round. Focus on timeless pieces that will still be stylish ten years from now. Focus on looking classy and stylish before you worry about looking trendy.

Trendy done wrong often turns out tacky, after all.

So work on your style sense with timeless wardrobe essentials that never go out of fashion. Focus on mastering the basics of men’s style, and you’ll be a better dresser before you know it.

Many guys shoot themselves in the foot by trying too hard to dress better.

Of course, I only know that because I’ve been one of those guys (and it wasn’t pretty). You stand out, but not in the way you want.

Shoot for subtle, simple, understated outfits and you’ll stand out in a good way instead.

Many men approach their casual style from the wrong angle; they aim to look youthful.

But if you want to look well-dressed, you should always aim to look mature.

Because maturity is an attractive quality in men. Maturity, after all, is what separates the men from the boys. Maturity shows masculinity and commands respect, and it’s a quality you want people to see in you.

You want to dress like a grown up. Everything overly flashy simply become inappropriate past certain age. Funny or cartoony tees are a definite no-go. Wearing a funny tee is basically like being the guy that makes the same joke over and over and over. It might be funny the first time you see the t-shirt, but T gets old fast. Also, avoid anything with slogans.

4. Give up the graphic Tees for a more mature look.

The first thing you should do to shed your boyish look is giving up your graphic Tees.

I know you love them. I once did too. In fact, I wore them non-stop. But you want to stop wearing them. You have so many better options.

Despite popular belief, they don’t make you look funny, edgy or original. In fact, because every other guy is sporting a graphic Tee too, you’ll just blend into the crowd. Plus, people associate them with guys who refuse to grow up.

Just look at the movies. You’ll never see a tough, masculine action hero or a suave rom-com heartthrob wearing a graphic tee. The only time you’ll see a graphic Tee is when the character is either a man-child, an actual child, or a slacker. You don’t want people to see you as a man-child, do you? Then be a man, and stop wearing graphic tees.

Instead, opt for solid, one-color T-shirts, striped tees or henleys. 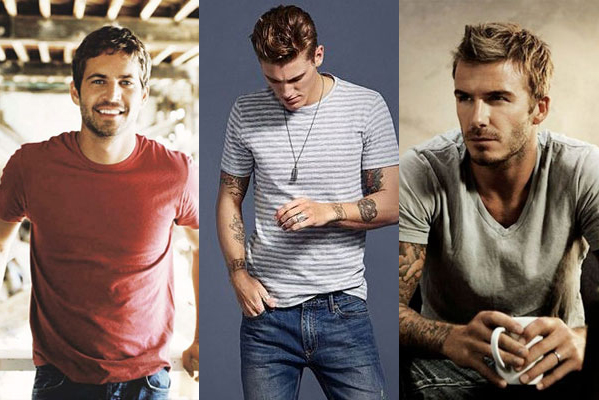 You might also consider wearing polo shirts or casual shirts. Just because you’re dressing casual doesn’t mean you can’t wear a collar. And a simple white shirt looks great with a pair of dark blue jeans.

The go-to casual legwear for any guy is a pair of jeans.

And nothing is wrong with that. Many men come to my site looking to move on from the T-shirt and jeans look. But jeans can look amazing, as long as you´re wearing the right pair.

Avoid baggy jeans. You want to avoid having to pull up your jeans every two seconds. They should keep themselves up without a belt. Also, they should not pool around your ankles.

Also, avoid embellishments. That means: No excessive distressing, no ripping, and no bleaching.

And, this should go without saying, but I have to say it anyway: Avoid big logos on your ass. In fact, no big logos anywhere on your outfit, PERIOD.

Instead, keep your jeans simple. Go for a straight, clean, dark-blue pair that fits like it was made for you. Trust me; you’ll look awesome. They’ll not only look better, but they’re more versatile.

6. Change it up down below.

Jeans are great, but they all look kinda the same, and they’re not your ONLY option for legwear.

I suggest one basic pair in camel or grey. And get one colored pair to change things up. (Wearing color below the waist is something few men do, so it stands out.) And you don’t have to go for fire-engine red or lime green. You can go for subdued colors like burgundy or army-green. 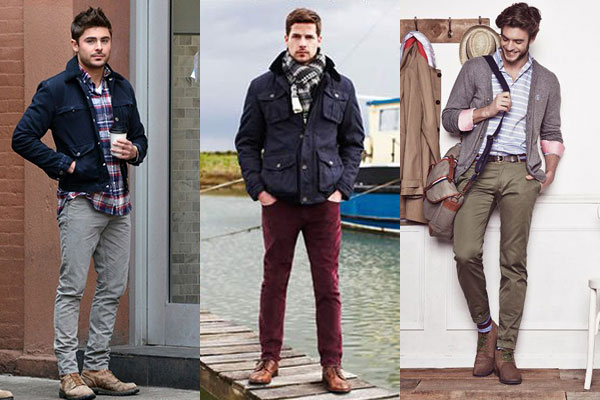 7. Class up your footwear (because the ladies notice).

Okay, you may want to sit down for this. Your dirty, beat-up sneakers will ruin an otherwise excellent outfit. You’ll want to replace them with something more dignified.

And don’t think people don’t notice your shoes. They notice. Especially women. I can’t tell you how many compliments I get on my shoes from women, and I’m hardly shilling out hundreds of dollar for a single pair, as some guys recommend.

Wear a pair of brown leather shoes instead of your everyday sneakers, and BOOM… You look sharper. But if you’re used to wearing sneakers al the time and want to ease your way into something else, let me introduce you to the desert boot.

Desert boots look much nicer than sneakers, but aren’t as dressy as some other leather shoes. They’re right in-between, which makes them perfect for casual wear. Plus, they’re super comfortable.

Get yourself a pair and you won’t regret it.

8. Decorate your wrists (because a naked wrist is boring).

Accessories are another good way to spruce up a dull outfit.

And I suggest you get in the habit of wearing a wrist-accessory first. Why the wrist? Because naked wrists are boring.

You can wear a watch, a leather bracelet, or both. Doesn’t matter what you wear, but wear something on there. It just gives your outfit a bit more personality. You’re saying, “I don’t have to wear this, but I like wearing it.”

Want to know an easy way to make a dull outfit more interesting? Add a layer.

Many guys feel a bit intimidated by layering because they don’t really know how to match clothes all that well. But you don’t have to know all that much about it. It can be done with very simple clothes too.

Imagine a guy wearing a plain grey sweater and jeans. Nothing wrong with that. It’s a fine casual outfit.

But still, it’s not that interesting. Now imagine him wearing a simple white shirt underneath his sweater. Boom. Instantly more interesting. It’s a simple fix, and hardly earth-shattering, but it just gives that bit more detail to the outfit that makes it more visually appealing. And you don’t have to stop at one additional layer. You can wear two, three, even four layer at a time. So play around!

10. Wear a jacket that elevates your casual look.

Okay, so you don’t have to suit up to dress well, but that doesn’t mean you can’t smarten your casual look up a bit with a well-fitting blazer.

This favorite of business-casual men can easily be worn in casual outfits too. It’s called smart casual — which essentially means stepping your casual outfit up a notch. A man in a blazer just looks good because blazers accentuate the male frame like no other garment.

It will give you an easy way to smarten even your simplest outfits up a bit. Plain white tee with jeans? Add a blazer, and suddenly you look pretty damn sharp.

You just got 10 casual style tips that should help you dress better. Plenty more where that came from, but these should be enough to get you started.
Whether you start with replacing your graphic tees, getting nicer shoes or decorating your wrists – it doesn’t matter. Just start somewhere. And after you took that first step, take the next, and the next, and the next.